On Wednesday 18th May, 10 children attended a cross country event at St Thomas’ Primary School. The team consisted of; Liam, Finlay, Keiran, Ryan, Oscar for the boys and Becca, Daisy, Ava, Hannah and Jessica for the girls.

On a personal note, Liam retained his crown as the boys champion from last year, with Oscar pushing him all the way and finishing the race in second. Becca came third in the girl’s race, testing the front two runners for the majority of the course.

Overall the team scored 31 points, meaning that they were crowned overall winners of the competition!! Well done to everyone involved in what was a fantastic event.

A special mention for Olivia, who had to withdraw from the race due to illness, but still came down and supported her fellow racers. 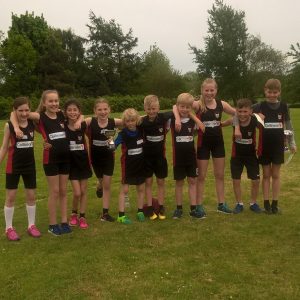